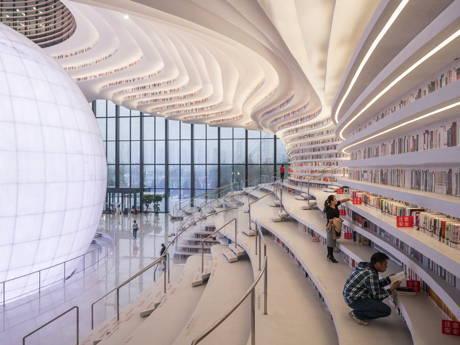 During these holidays, we need good reading, as much as eating and drinking! Not too long ago, paper books seemed to be on an irreversible decline. But actually in 2016 there was a slow down in the sale of tablets and other e-readers, while the regular paper format was picking up a second wind. In the USA for example, the largest market in the world, electronic books lost more than 14% in sales, while paper books gained 3.3%, according to the Association of American Publishers. We now await the results for 2017. Whatever the figures may show, paper versions are showing a fine resistance, and the ideal symbol of this is the surprising library designed in China, at Tianjin, by the Dutch agency MVRDV. Its shelves that go on further than the human eye can see render almost tangible the concept of infinity that Internet seemed to have the monopoly of.

With a view on the cosmos

Artists have always been fascinated by the representation of the starry canopy. Likewise, the various views of the cosmos often resemble works of art. Consequently, this book can be classified in two different sections. One can search for scientific elements for example, in the photos taken by the Hubble Space Telescope, or by the Image satellite of the NASA that helped us better understand the phenomenon of the northern lights  interaction between the earths magnetic field and solar particles. But this book can also be leafed through like a book of hours, given the extreme beauty of these stellar bodies, immortalized on paper, stone or wood, that resemble illuminations. All the artists mentioned, be it the painters of the astronomic ceiling of goddess Hathor in Egypt two thousand years ago, the calligrapher of prince Iskandar for his horoscope from 1411, or the wise Sioux Indians who transcribed the rain of meteorites in 1876, all of them paid a tribute in their own way to the endless space over our heads, the engine of our metaphysical thoughts.
 Universe, introduction by Paul Murdin, Phaidon, 2017, 252 p., 49.95.

A Spaniard who was born in 1913, and died in 2005, Antoni Clavé has many other points in common with Picasso, whom he met in 1944, such as the hate of Franco, the love of bull fights, the fascination for some of the great old masters, such as Velázquez and Rembrandt, the taste for poor materials such as ropes, nails or cardboard. And they both had a passion for engravings. In this field Clavé had an imagination that rivalled with that of the famous Andalusian. He exercised that skill from 1937 to 2001, perfected mysterious techniques, and hesitated between the clearest figuration and the most enigmatic abstraction. The 517 numbers of his complete works have been mapped, as well as the prolific activity as an illustrator in which he adapted to authors as different from another as La Fontaine, Pushkin or Saint-John Perse.
 Antoni Clavé, printed work, catalogue raisonné, Skira, 2017, 264 p., 99.

Paris, the capital of the Netherlands

We all know Van Gogh, Van Dongen and Mondrian well, Scheffer and Jongkind a little less, while Maris and Breitner are practically unknown to us. They have on thing in common though, that is that all were Dutch and all lived at a given moment in their careers in Paris. They all lived sometime between the French Revolution and the First World War. And as the catalogue of the exhibition at the Van Gogh museum (until 7 January, then at the Petit Palais in Paris) reminds us, access was very easy between Amsterdam and Paris at the time, thanks to the railway. As of 1847, one could travel from one city to the other in a day. It does seem the French capital was the center of the art world when we see the statistics: out of the 13,908 artists studied, 567 travelled to Belgium, 351 to Italy  the former nation of the Grand Tour -, 112 to Great-Britain, and 1136 to France. A strong art market, the interest in contemporary production  with the Annual Fair (Salon) and the collections of the Luxembourg museum, as of 1818- attracted burgeoning talents. The way the book is presented helps us easily understand, with each one of the artists studied placed in a specific chapter.
 The Dutch in Paris, 1789-1914, Van Gogh Museum, 2017, 272 p., 29.95

A few elements have contributed to build the legend of Arthur Cravan. His life as a journalist, writer as well as painter and boxer make him into a character of a novel to begin with. Add to that the fact that he was the cousin of Oscar Wilde, which the media lapped up. And then put a dab of mystery by questioning his death somewhere on the Rio Grande, on the border between Mexico and the USA. Cravans real name was Fabian Avenarius Lloyd. The catalogue, and the exhibition at the Picasso museum in Barcelona until 28 January 2018, do not aim to be a new biography, but rather to shed new lights on a specific period, the time he spent in Barcelona in 1915-1916. This adventurer alternated between boxing matches, among which a famous defeat against the worlds first Black champion, Jack Johnson, and literary evenings with Picabia and other Cubist artists based in Catalonia during the war. The book also presents a series of paintings supposed to be by him, signed by another pseudonym (Edouard Archinard) and exhibited at the galerie Bernheim-Jeune in Paris in 1914.
 Arthur Cravan. Maintenant ?, directed by Emmanuel Guigon, Silvana Editoriale, 288 p., 32.

To read more reviews (on books published in French), click on Version Française, at the top of the page.