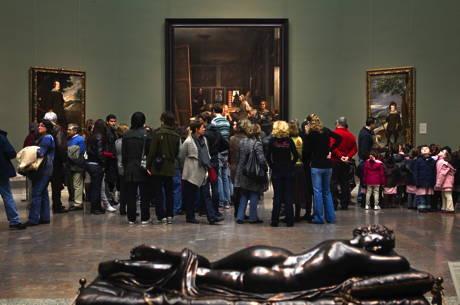 The Spanish capital has just celebrated the 400th anniversary of its Plaza Mayor, and the centennial of the beginning of the works on the subway. Needless to say, many other events will be honored during 2018. In the art field, the most awaited one is the 200th anniversary of the Prado museum, which just wrapped up 2017 with very good figures  attendance at 2.8 million visitors. November 19, 1819 was the opening to the public of the rooms with 311 Spanish paintings. The historical moment will be celebrated this year on that same date. Before that, a number of remarkable exhibitions will be held, among them Painting on stone on 17 April, and Portraits by Lorenzo Lotto on 19 June. Unfortunately though, the incorporation by Norman Foster and is team of the Salon de Reinos, a XVIIth century palace, into the museum, one of the iconic projects of Prado 200, will not be completed before 2021.

The wheels of Fortuny

MADRID  Whether you refer to the son, Mariano (1871-1949), or to the father, Mariano (1838-1874), it is easy to get confused with the Fortuny family. As a matter of fact, the best known is the son, the refined and multi-lingual couturier who set up in a Venetian palace. An exhibition dedicated to him in Paris, at the Palais Galliera, just closed last month to reveal his art to those who still did not know it. While the father was extremely famous in the 19th century, for he had the same worldly characteristics, he did not age well. This is reason enough to visit the Prado and the detailed description of his itinerary. The man was a gifted drawer, and trained on the battlefields of the war in Spanish Morocco. He made a reputation and a name for himself in France, greatly supported by enthusiastic critics, such as Théophile Gautier. He rubbed elbows with the high society, such as the duke of Riánsares in Paris for whom he painted a military parade on a 15 sq. meter ceiling (the painting is now in the Prado), or countess Colonna in Rome who opened her palace to him at leisure. But he also knew how to preserve the loyalty of certain amateurs, such as collector William H. Stewart. Everyone loved his genre scenes, his Orientalist compositions, his views of Andalusian gardens, and his historical reconstitutions of the precious 18th century. This chronological exhibition, which ends with his own cabinet de curiosités (he was a great collector), allows the viewer to appreciate his great talent when painting with watercolors. As he grew older, he experienced style that was less constrained and more vibrant when he painted with his friends on the Roman coast. But he was swept away by an ulcer at the age of 36.
 Fortuny at the Prado museum, until 18 March 2018.

MADRID  A subway station in the Spanish capital carries his name. It is on line 3, near Plaza de España. But Ventura Rodríguez (1717-1785), who was almost a contemporary of his Scottish colleague Robert Adam, remains mostly unknown. Yet this architect contributed to give Madrid its present aspect, in particular in the colossal works of the Palacio Real. He did not limit himself to the capital; he also worked in Zaragoza, with the Basilica del Pilar. The exhibition in honor of the tri-centennial of his birth is organized in an institution of which he was one of the pillars for forty years, the Academia de San Fernando, where Picasso studied briefly in 1897. We see this great scholar of Italian architecture, and lover of the Baroque period, at the center of a true cultural network that included in particular Goya. We discover that he not only left behind a remarkable number of buildings, but of writings, and drawings as well. His project of a cathedral in 1748, when he had not yet built anything, opened the way to his election to the Accademia di San Luca, in Rome.
 Ventura Rodríguez, arquitecto de la Ilustración, at the Real Academia de Bellas Artes de San Fernando, from 21 December 2017 to 8 April 2018.

View of a room with the puppets of Woyzeck in the Highveld, photo Joaquín Cortes / Roman Lores, photo archive Museo Reina Sofía, 2017.

MADRID  What are those large wooden puppets, placed on a podium? They are the actors of a surprising Woyzeck on the Highveld, adapted from the play by Büchner, with settings and passions from South Africa. What are those charcoal drawings of antique temples? That is the setting of an opera by Monteverdi (The Return of Ulysses) given in Brussels. And what are these prints and eight short films? Those are part of his wide project on Gogols The Nose. The art of William Kentridge, born in 1955 in Johannesburg, is as varied as his life has been. He studied political science, was a precocious theater director, went to Paris to study with mime Jacques Lecoq, and today he is one of the most committed artists in theater. First he was against apartheid, and today he is against all forms of injustice that man continuously inflicts on others. Fortunately we still have literature! Goethes Faust and Jarrys Ubu are also influences he has exploited. This exhibition, one of the rare ones dedicated to him in Spain, and the first on his theater work, underlines his passion for the written word.
 William Kentridge. Basta y sobra, at the Reina Sofia museum, until 19 March 2018.

BRUSSELS - Jean-Luc Moulène is at the Verrière of the Fondation Hermès: in Angle mort, he sets mushrooms to rot on paper, exhibits oil paintings and tar paintings, and enhances the whole thing by playing with mirrors. From 19 January to 31 March 2018.

ENGHIEN-LES-BAINS - Ange Leccia takes over the casino at the spa resort with an installation that combines, as usual videos and still frames for a Communauté des images (Community of images). From 19 January to 15 April 2018

PARIS - In Le peuple de la vallée, photographer Pierre de Vallombreuse shows his research on the Palawan ethnic group in the south of the Philippines, where he has travelled 17 times. At the Musée de lHomme, from 18 January to 8 June 2018.

A member of the New Abstraction movement in New York

Our selection of new exhibitions in galleries in France, Belgium, Switzerland

On 5 October 1789, the Parisian mob, led by the fishmongers wives, headed to Versailles to seek out the baker, the bakers wife, and the little helper. It was a very rare case of intrusion by the crowds in the castle of the kings of France. But, as shown in this book  and in the exhibition it accompanies that will run until 25 February 2018 -, visitors have never lacked in the royal residence. Indeed, they were from a different species, more like dukes and cousins, generals and allied princes, or ambassadors. Europeans easily complied with the strict protocol, especially when it came to exchanging gifts: Louis XIV liked to offer portrait boxes, while Louis XV gave tobacco boxes. But the exotic guests were more difficult to discipline! Persian Reza Bey, in 1715, took the freedom for example of smoking in the carriage of the Sun King and only offered a medicinal balsam, while the Bey of Tunis, in 1777, had the nerve to show up at the audience with a dagger. The famous embassy of Siam in 1686 was greatly documented by the stories. The assets are sumptuous, the gifts were surprising  such as the canons in hammered silver -, but were things very different from the economic missions in our times? The ambassadors, invited to visit the industrial plant of Saint-Gobain, usually return with an order for 4, 000 mirrors.
 Visiteurs de Versailles, directed by Danielle Kisluk-Grosheide and Bertrand Rondot, Château de Versailles/Gallimard, 2017, 336 p., 45.