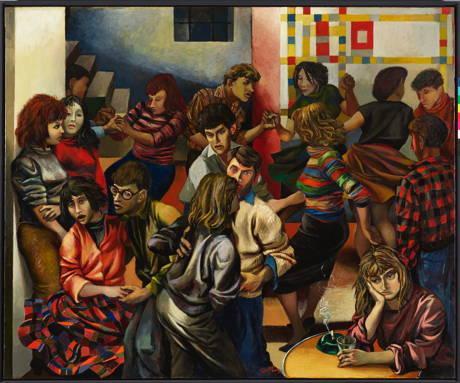 A taste of Italy

Just as we thought it was on the wane, winter seems to be back, more aggressive and more biting than ever. In order to keep a cheery disposition, we all start dreaming of jasmine, of orange blossoms, and of a bed of blueberries at the foot of an olive tree. Dreams of Italy, of course, the synonym of spring, and not only in the allegories painted by Botticelli. Current events give us enough to dream about: beautiful exhibitions will be opening throughout the peninsula, and elsewhere. Italy has other causes for immediate concern, such as the elections on 4 March and a possible return of Silvio Berlusconi, or the sorpasso by Napoli over the Juventus in Serie A we are talking of soccer of course-. But these will have no influence on the events in the coming months. We are particularly eager to see a very interesting retrospective at Palazzo Strozzi, in Florence, Birth of a nation, opening on 16 March. It will bring back to life the atmosphere of the 50s and 60s, the years of the Italian boom which nostalgia recreates in the most sumptuous colors.

TURIN  He could be a sort of combination between Picasso and Fougeron. Renato Guttuso, 1911-1987, was one of the leading stars in painting in the years following the Second World War. He was a Communist, a believer in social art, and he painted the lives of little people, markets and workers, like Fougeron. But he was also capable of large, almost abstract compositions, in which one could see the influence of Picassos Massacre in Korea and even of Goyas Dos de Mayo. His position of an apparatchik of the party, and his socialist realism set him a bit on the margin. But the celebration of the anniversary of May 68 is a good opportunity to bring back his canvases full of energy, of color and commitment. This is also an opportunity to discover other aspects of his art, his nudes -the proud communist was known to be quite a ladies man, and had a long affair with countess Marzotto-, as well as is still lives or the wild boogie-woogie in a Roman basement.
 Renato Guttuso, larte rivoluzionaria nel cinquantenario del 68 at the GAM, from 23 February to 24 June 2018. Catalogue Silvana.

RIVOLI - The Castello di Rivoli, a baroque structure by the great architect Juvarra, and remodeled by Andrea Bruno, is known for its very specialized retrospectives of contemporary art, from Sophie Calle to Luigi Ontani, from Piero Gilardi to Ana Mendieta. This season it offers an incursion into the avant-gardes of the XXth century. Following the agreement signed with the Francesco Federico Cerutti foundation, which now manages the extraordinary collection of the businessman (1922-2015) from the Piedmont region, the small family-owned book binding company has become a cash machine. Before showing the whole collection -300 works- of the fund at the beginning of 2019 at the villa of the very discreet magnate that is being restored, the Castello di Rivoli presents an appetizer with its works by Chirico, eight to be precise, among them a few major pieces such as his Metaphysical Muses, that are exactly a century old.
 Giorgio de Chirico. Capolavori della collezione di Francesco Federico Cerruti at Castello di Rivoli, from 6 March to 27 May 2018.

The Accademia of San Luca under the limelight

PERUGIA  All Italian or foreign painters in Rome could measure their success according to one consecration: whether they were elected or not to the academy of San Luca (the apostle Lucca being the patron of painters, for having painted the portrait of the Virgin). The Accademia is still housed at the Palazzo Carpegna, on Piazza di Spagna, and is one of those institutions of the Renaissance that succeeded to go through time. A first association was already mentioned early back in 1478, but its by-laws were really approved in 1607, under the authority of Federico Zuccari, the prince of painters. It then went through its real golden age, with presidents such as Bernini, Vouet, Poussin, and Le Brun. Their homologues today are Gianni Dessì (the president, born in 1955), Jim Dine, Alvaro Siza or Tony Cragg. The academy has become very discreet, in spite of having a treasure of over one thousand paintings, three hundred sculptures, and five thousand drawings, which it willingly lends. This time it is in the limelight by lending the Savings Bank of Peruggia a group of one hundred paintings, including a putto by Rafaello, Love and Venus by Guercino, plaster models by Thorvaldsen and Canova, self-portraits by Alma-Tadema and Balla.
 Da Raffaello a Canova, da Valadier à Balla at the Fondazione Cariperugia, from 21 February to 30 September 2018.

MILANO  The end of the 20th century marked the true explosion of Italian fashion at a world level: Valentino the pioneer, who learned his art in Paris, then Armani, Versace, Moschino, Dolce & Gabbana, Prada, etc. The exhibition covers these last exceptional thirty years and shows how the success was due in particular to the osmosis between a truly unbridled creativity and a truly reactive industrial base.
 Italiana. LItalia vista dalla moda. 1971-2001 at Palazzo Reale, from 22 February to 6 May 2018.

The colors of the soul

FERRARA  The avant-guard artists in 1900 took great interest into how they could express fear, insanity, anguish, and desire by painting, while influenced by the theories of Darwin and Freud, and the development of abstraction. Some ten Italian painters are brought together in the beautiful palace of Este, (vis-à-vis European alter egos). We know some of them well, such as Boccioni, de Chirico, but what is interesting here is to rediscover the others, such as the local artist Previati (1952-1920) or Morbelli (1853-1919), who developed a very colored symbolism.
 Stati danimo. Arte e psiche tra Previati e Boccioni at the Palazzo dei Diamanti, from 3 March to 10 June 2018.

Tintoretto was also young once

PARIS  He is one of the great artists of the Venetian Renaissance, the epigone of Titian though no one is sure he studied in his workshop- and the equal of Veronese. The exhibition, by bringing together loans from a great number of international institutions, be it Italian or the Kunsthistorisches from Vienna, the museum of Budapest, museums in the province such as Amiens or Nantes, etc. sets a few markers and shows the unlimited ambition of the man who in defiance had himself be called Tintoretto (the little dyer, his fathers profession) and develop his art and became the master of frescoes with a shady character.
 Tintoret, naissance dun génie at the musée du Luxembourg, from 7 March to 1 July 2018. Catalogue RMN.

The ancient Greeks never practiced art criticism, but simply described paintings and admired their natural aspect. Vasari and his colleagues set the bases with their lives of the artists. But the golden age of art criticism can be found in Paris Salons, with Diderot, and Baudelaire, and the Goncourt brothers. The renewal was very obvious at the beginning of the 20th century, with writings by Fénéon, Apollinaire, or gifted dilettantes such as Blaise Cendrars. This book can be read by one and all due to its 150 entries and not 50, as the title of the collection pretends, in other words three books for the price of one!- and traces an efficient chronology. It allows us to dig out certain characters unfairly forgotten by the cultivated public, such as Lionello Venturi and Michel Georges-Michel (died at the age of 102 in 1985!) who controlled the situation at the time of Montparnos. The book also sheds light on interesting persons such as dAnnunzio, Rilke or Sâr Péladan. In face of such culture, one regrets the lack of an index, which could have been very useful, and the choice of stopping in 1945. Art critics have certainly lost some of their initial characteristics today, as it is squeezed between journalism and poetry  but the contributions from the Marxist school or Clement Greenbergs formalism deserve to be mentioned. Maybe in the next volume?
 Histoire de la critique dart, by Gérard-Georges Lemaire, Klincksieck publishing house, 2018, 480 p, 25.

STEPHEN SHAMES - POWER TO THE PEOPLE

Deep into the world of the Black Panthers in the 1960s