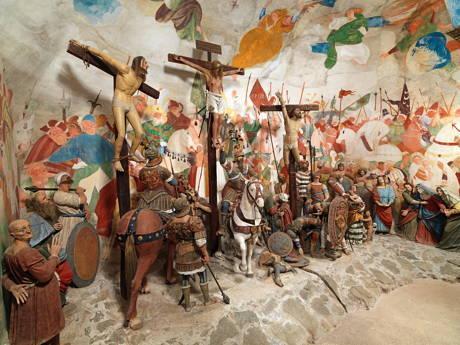 Ferrari, the formula 1 of the Renaissance

VARALLO-VERCELLI-NOVARE  It is not surprising that he shares his name with a racing car, and a spumante, since Ferrari is a very common name in North West Italy: it referred to the person who worked with steel. The Ferrari we honor today is surely the least known of them all. His first name was Gaudenzio, and he was born circa 1480, and died in 1546, at an advanced age for his time. He was schooled in the workshop of Milanese painter Stefano Scotto, and became one of the greatest painters of the Renaissance in Piedmont and Lombardy. Many of his paintings  the lives of saints - decorate churches and chapels. Most particularly, one of his masterpieces from his youth, the frescoes of Sacro Monte de Varallo, in the valley of Sesia, which trace the Way of the Cross, as remarkable as the work of Aleijadinho in Congonhas in Brazil. The retrospective dedicated to this artist is exceptional in many ways, starting with the fact the organizers succeeded in bringing back works that are scattered in great museums, such as the Louvre, the Städel in Frankfurt or the museum of Fine Arts in Budapest, and that it is presented in various locations. Aside from Varallo, which represents the energy of youth, Vercelli, and Novara take part by documenting the middle and the end of his career, when he answers the siren calls of Mannerism. Each time the visitor must foresee various stops, between churches and town halls, museums -Francesco Borgogna at Vercelli- and basilicas - San Gaudenzio in Novara-. A slow visit, as the Italians say.
 Il Rinascimento di Gaudenzio Ferrari at Varallo Sesia, Vercelli and Novara, from 23 March to 1 July 2018.

Liebermann, the shining light of the 1900

THE HAGUE  Max Liebermann (1847-1935) is rarely shown in the Netherlands, as the Gemeentemuseum laments in the introduction to this show. What could we say about France then, since it was here that he worked right after the war of 1870, fascinated by the art of his master Millet? It is true though that the German artist had a particularly strong bond with Holland: indeed, as of the beginning of 1880, he went each summer, together with Jozef Israels, twenty years younger, to paint works filled with sunlight  beach scenes, groves with shadows, and picturesque characters. It is not easy for us to imagine today the success the artist knew at the turn of the 20th century: he was then worth more than the great Impressionists. The end of his life was obscured by the rise of the Nazis, and the talent of this worldly painter, a true symbol of an open Europe (a German Jew painting Dutch landscapes in a French Impressionist style  as the museum describes him-), never met the success he had known in the past.
 Max Liebermann, Impressions of Summer, at the Gemeentemuseum, from 24 March to 24 June 2018.

ARLES - EYGALIÈRES  It takes no less than three venues and three exhibitions to pay a tribute to an artist who has disappeared completely from our sight. Yet Alfred Latour (1888-1964) was famous in his time, as he was brilliant in a series of disciplines, as a painter of course (at the Espace Van Gogh in Arles), as well as an engraver and a designer of textile motifs used by the major fashion houses  he received the grand prize from the Salon des arts décoratifs in Paris in 1925-, or even in advertising  in particular for Nicolas, the wine-seller. He didnt do too badly as a photographer either, as can be seen at the Musée Réattu and the Maison des consuls dEygalières, where he spent a large part of his life, in particular during the war periods.
 Alfred Latour at Espace Van Gogh, at the musée Réattu (Arles), and at the Maison des consuls (Eygalières), as of 30 March 2018.

Adolf Loos, the purity of lines

MADRID  His work Ornament and Crime labeled him as a sort of Blue Beard of aesthetic excesses, a sort of guardian of the temple of functionalism and rationalism. Actually, though Viennese architect Adolf Loos (1870-1933) built very sober homes, he found in interior decoration and furniture a simple and efficient style, without ever being austere  even though of course he kept his distance from the excesses of Klimt and the Secession movement. A few examples of his work can still be seen even in Vienna; such as Knizes tailor workshop or the American Bar, and this exhibition develops the principal by bringing together armchairs, light fixtures and other objects of interior decoration.
 Adolf Loos. Espacios privados at the Caixa Forum, from 28 March to 24 June 2018.

The role she played in the French Resistance, her commitment when the situation got worse in the Algerian conflict, and her position as a feminist have overshadowed the fact that ethnography was the first and great passion Germaine Tillion kept throughout her long life (1907-2008). This book reports on the campaign she carried out with her colleague Thérèse Rivière (1901-1970) in the middle of the thirties in the mountains of Aurès, in Algeria. The trip was commissioned by the Musée d'Ethnographie of the Trocadéro (before it would become the Musée de l'Homme under the impulse of Georges-Henri Rivière, Thérèses brother). The empathy Germain Tillion and her colleague had for the populations of the region can be seen clearly, as well as their true capacity to document the ways of living, the material conditions, the natural decor. The work accompanies an exhibition at the Pavillon populaire de Montpellier until 15 April.
 Aurès, 1935, photographs by Thérèse Rivière and Germaine Tillion, text by Christian Phéline, Hazan, 2018, 144 p., 24.95.

A boost for the Nouvelle Quinzaine littéraire

Created by Maurice Nadeau, an emblematic figure of the period after the Second World War, with François Erval, the Quinzaine littéraire, born in 1966, turned into the Nouvelle Quinzaine littéraire in 2013. It aims at reporting on the variety of creation, from human sciences to poetry, and currently it suffers like all paper press- from a fall in sales and the narrowing of the distribution channels. A subscription campaign aims at reinforcing it by enlarging its readership.

Link towards the project on kisskissbankbank.com

The 5th edition of a photofestival (photo: Orlan)

PARIS - The Salon du dessin (Drawing Fair)is being held at the Palais Brongniart until 26 March 2018.

PARIS - The Drawing Now fair, dedicated to contemporary drawing, is held at the Carreau du Temple, from 22 to 25 March 2018.