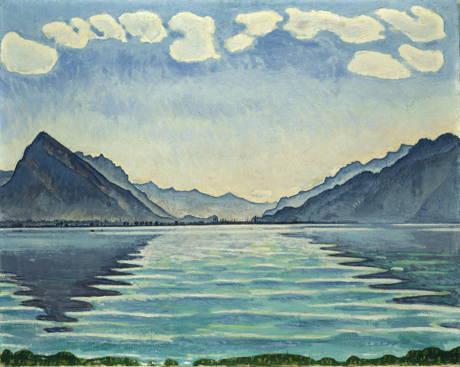 GENEVA  Throughout the year, Switzerland will be celebrating one of its most famous painters, Ferdinand Hodler, who died on 19 May 1918 in an apartment in Geneva on the quai du Mont-Blanc. Among the various exhibitions this one at the Musée Rath with the support of the Bern Kunstmuseums rich collection confronts him to no one else but himself. It takes its clue from a conference the painter himself gave in 1897, when he was at summit of his art, at age 44, in which he turns into theories his idea on correspondences (referring to forms  lines, symmetry -, feelings, figures, or even an artists production through time) that inspired his work. In the midst of the Symbolist era, here is another approach to the matter that already haunted Baudelaire so.
Hodler//Parallélisme at the musée Rath, from 20 April to 19 August 2018.

PARIS  The fire that ripped through the MoMA in New York in 1958 had no human victims fortunately, due to the specific intervention of its director Alfred Barr Jr., who had all the employees leave through the roof. But the collection suffered a great loss, following the total destruction of a version of Monets Nymphéas. Barr was determined to make up for this loss, and managed to collect funds to buy a larger and more complete version (W1992). This story alone summarizes the central position Monet - and his cycle of old age- have in the genesis of 20th century American art. Whether he is seen as an admitted source of inspiration as with Ellsworth Kelly, or as a direction among others as with Pollock or Rothko, the confrontation between the old master and his young American heirs offers unexpected similitudes. The exhibition focuses on this aspect by bringing in the greater artists, such as Barnett Newman, Sam Francis or Clyfford Still.
 Nymphéas. Labstraction américaine et le dernier Monet at the Orangerie, from 13 April to 20 August 2018.

Bic at all levels

PARIS  The 4 color ballpoint pen, sold in the 1970s, is highly ranked in the world of design of the 20th century, as well as the older Cristal, from 1950. These writing instruments, all of the Bic brand - the abbreviation of the name of the Baron Bich-, were used over the five continents. They have become objects of a cult today, and artists take ahold of them- concretely or allegorically, and weave legends of their qualities. The current exhibition brings together names still unknown to the public at large, from Sara Abdu to Tatiana Wolska.
 La Collection Bic, at the 104, from 14 April to 13 May 2018.

Titian on the rocks

MADRID  One has to know Latin well - or review the old notebooks - to understand the title of this exhibition. In lapide depictum: by using Google translation, one does not even pick up the Oxford dictionary. We understand we are referring to works painted on rocks. The Prado museum presents only a few - nine to be precise - not for being stingy but rather due to the choice of having to take out of its own collection and the relative scarcity of these objects. The interpreters brought together are not among the least known, judge for yourselves: Sebastiano del Piombo, Daniele da Volterra or Titian. Stone had the virtue of being eternal, of being solid, and of catching light in a most particular manner. While these trials were nothing more than isolated tests in the careers of artists who were inventive and curious of all that is new, they left some surprising results. One being the Ecce Homo on slate by Titian.
 In lapide depictum. Pintura italiana sobre piedra 1530-1555 at the Prado museum, from 17 April to 5 August 2018.

A lost city under the 15th parallel

In the deep jungles in Central America, the slightest geometric mountain may hide a forgotten pyramid, any cave may hold a treasure of jaguar statuettes in jade. But to find them you need to fight insects, snakes, or Leishmaniosis. That is what journalist Douglas Preston practically did. He was already known for subjects published in the National Geographic, when he followed scientists in search of a forgotten city in Honduras, in the region of Mosquitia, near the border with Nicaragua. The remoteness of the country, its reputation of violence, and even the difficult access to the site protected this city of the monkey god. It was hidden under the vegetation. This truly surprising discovery seems to confirm the existence of a civilization parallel to the one of the Mayas, completely disseminated by the European illnesses brought in by the colonialists.
 La cité perdue du dieu singe (French translation of The Lost City of the Monkey God, published 2017 by Grand Central Publishing), by Douglas Preston, Albin Michel, 2018, 384 p., 24

An exhibition that shows the strength of private collectors in Belgium

GLASGOW - Glasgow International contemporary art festival is being held from 20 April to 7 May 2018.