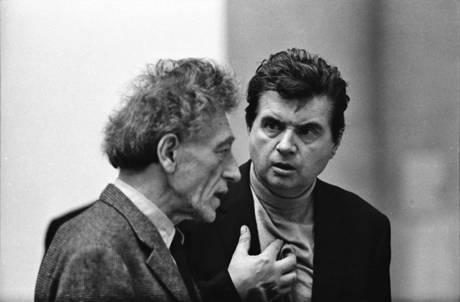 Giacometti and Bacon, so different, yet so close

BASEL - The fashion seems to be to put artists face to face with one another, and the number one favorite is Giacometti (1901-1966). He was recently confronted to Bruce Nauman at the Schirn in Frankfurt, to Picasso at the musée Picasso de Paris, to Derain and Balthus at the musée dArt moderne de la Ville de Paris. Now it is the turn of Francis Bacon (1909-1992). At first thought, nothing seems to link the austere Swiss artist who worked mainly with volume, to the exuberant Anglo-Irish artist dedicated to painting, talking, and the bars of Soho. Actually, they share many points, and not only the fact that behind his austere appearance of a Swiss Calvinist, Giacometti too enjoyed many of the pleasures of life. This exhibition launches bridges between their common obsessions: the human figure and its dilution into abstraction, isolation, and the permanent recourse to the great examples of the past (Velázquez being one obvious example as far as Bacon is concerned, Egyptian and Etruscan art being Giacomettis points of reference). Behind the two men, there is a woman who is the red line between them: Isabel Rawsthorne (1912-1990). She had a surprising personality, and has been greatly forgotten in spite of having been an artist herself, and mostly the muse - and often the mistress - of a number of artists. One can count among her relationships Epstein, Derain, composer Constant Lambert, Giacometti (he was madly in love with her at the eve of the Second World War) and Bacon. It seems Picasso, a true womans killer, did not succeed to seduce her. Given her magnetism and the violent passions (love, sex, alcohol) that marked her life, her role was far from insignificant in the genesis of these two major artists of the 20th century.
 Bacon Giacometti at Fondation Beyeler, from 29 April to 2 September 2018.

De Staël, burnt by the sun of Provence

AIX-EN-PROVENCE - Nicolas de Staël, born in 1914, of Russian origin, had a special link to the South, and not only because he chose to commit suicide there by jumping off the cliffs of Antibes on 13 March 1955. His stay in Provence, one single year in the Luberon, invited by René Char in 1953-1954, was like the final fireworks of an intense and tortured existence. He was torn between his wife and his passion for a new woman, and produced at an impressive speed as we can see in the nearly one hundred works exhibited here. His art was purer and this gave fiery colors to the boats, ports, trees, and houses  and even more so after the trip to Sicily in the summer of 1954. Paint placed flat with a coat, red, blue, blinding white, yellow, even purple, and the stage was set: it was abstraction, even if it was the Mediterranean. Whats more, it is a vision  in the mystic sense- of the Mediterranean.
 Nicolas de Staël en Provence at the hôtel de Caumont, from 27 April to 23 September 2018.

Escher, the king of illusion

LEEUWARDEN - A master of trompe-lil, with a cosmopolitan name, Escher never let anyone guess his origins. He is from the Frise region in the Netherlands, and as his native town Leeuwarden is the European capital of Culture, it has decided to honor him with a large retrospective. The exhibition could have been set up in the family house where he was born in 1898, but today it is a museum dedicated to ceramics. The tribute is already deemed a success given the more than 25 000 tickets sold before opening, and demonstrates his popularity in and outside his country. It has been set up in the brand new museum of the region, which dedicates a permanent exhibition to the prodigal son. Eschers art of illusion rests on a very classic substrate. His impossible architectures are nurtured by a number of trips to the sun, in particular to Italy. The 80 prints are the backbone of the exhibit, completed by a few drawings and objects. To complete this program that could seem minimalist, the museum has announced, in parallel, a series of contemporary installations, playing on the theme of the trompe-lil.
 Eschers Journey at the Friesmuseum, from 28 April to 28 October 2018.

Lerski, a hymn to pioneers

His name -actually the pseudonym of Israel Schmuklerski- sounds like that of a Finnish long-distance runner, or an Austrian Spartakist. He is neither of the two, but deep inside, a little of both. A Jew from Strasbourg who lived in Switzerland, the USA, and Germany, Helmar Lerski (1871-1956) uses photography as a political weapon, taking photographs of the pioneers in Palestine in the thirties. He was fascinated by the portrait, and he sculpted the body and in particular the face like the antique sculptors of marble. He never imagined that this fashionable theme would soon become a heaven-sent for the new racial theories. An exhibition at the musée dArt et dHistoire du Judaïsme allows the visitor to rediscover this widely forgotten champion of the avant guards. A short note from the director, Paul Salmona, allows us to understand the chaotic history of the purchase of this series, which could have dragged on for years had it led to a trial, as this matter is ruled by the laws of four different countries: France, Switzerland, Israel and England as it governed Palestine at the time.
 Helmar Lerski, pionnier de la lumière, Gallimard, 2017, directed by Nicolas Feuille, Gallimard, 2018, 176 p., 32.

MONACO  The artmonte-carlo fair of modern and contemporary art will be held on 28 and 29 April 2018.