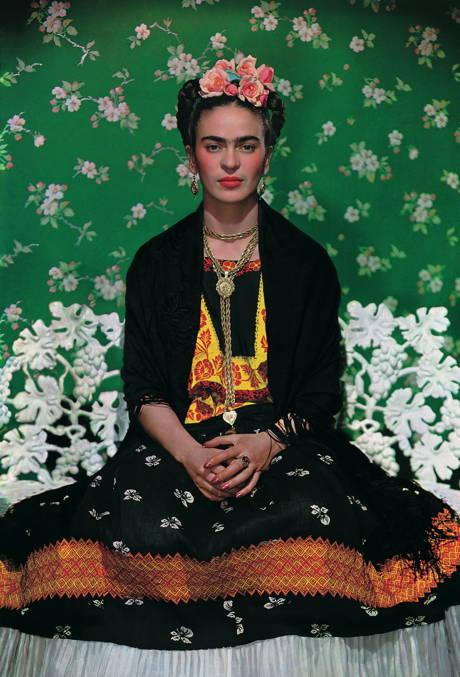 Frida, coquettish all the way

LONDON  Everything that has to do with Frida Kahlo loses its status of daily object to become a mystique object. There is a lot of money at stake, but that is not the only reason. A few months ago the family was at odds all because of a Barbie doll could one play like that with an iconic figure? In the idolization of the universe of the Mexican artist, the turn today is her wardrobe, exhibited as if they were almost religious relics. We see the huipiles (the colored blouses from the region of Oaxaca) which she loved so, satin skirts, and her makeup. What has the greatest impact, of course, are the marks of her suffering (she suffered from polio in her early years and was then the victim of a tram accident, in which she was fractures by a steel bar that penetrated her body): her corsets painted with a fantastic vegetation, or her artificial leg, which she decorated with a bright red bootie. This choice combines perfectly the current speech on equality: why should people with a handicap not be as coquettish as their fellow humans?
 Frida Kahlo: Making Her Self Up at the Victoria & Albert Museum, from 16 June to 4 November 2018.

About the dictatorship of white in sculpture

PARIS - Le Corbusier published a book, When cathedrals were white, inspired by his great admiration for American skyscrapers. Fifty years later, in order to correct the erroneous idea this famous title had instilled in peoples minds, art historian Alain Erlande-Brandenburg answered with his When cathedrals were painted. Which is simply the truth. This idea of an original whiteness pursues us regarding sculpture as well: we believe the Greeks and the Romans, for example, could only produce immaculate marble Venuses; or that the gothics could only produce pale prophets which time alone could turn yellow. All this is Winckelmanns fault. Little does it matter that color was always present: our aversion towards polychrome sculpture taints all periods, as can be seen in the exhibition at the musée dOrsay. Indeed, it aims at restoring the reputation of the victims of the 19th century. Gérôme and Gauguin  who were also painters-, Cordier and Carriès - more recently  stick out of the crowd. But who can remember Lombard, Barrias, or Rivière? Glazed sandstone, gold bronzes, glass paste shine and bring their sculptures to life. But they are almost automatically underestimated and considered kitsch. There is a lot of work to be done, to chip a bit off the supremacy of white!
 En couleurs. La sculpture polychrome en France at the musée d'Orsay, from 12 June to 9 September 2018.

BASEL  Among the Gilliam family, we all know Terry, the head of the Monty Python recently back in the limelight due to his endless legal and cinematographic saga focused on his Don Quijote. But this name of Normand origin (derived from Guillaume-William-) has other respectable bearers, among them Sam, a painter born in Tupelo in Mississippi in 1933, an apostle of his race (he was the first black American painter to represent the United States at the Biennale of Venice, in 1972, where he came back in 2017), and of colors. He was conveniently (convenient for whom?) classified as an Abstract Expressionist, and became a specialist of his own type of drape by presenting paintings without a frame, reminiscent of the linen washwomen put out to dry. The series he did as of 1968, in the middle of the turmoil of all the demands against white power, is presented in the rooms of the Kunstmuseum, while his paintings are the craze at Art Basel, where they are auctioned for nearly one million dollars. This is a belated but important recognition at a time when other Afro-American artists such as Kerry James Marshall or David Hammons occupy the front of the stage.
 Sam Gilliam, the Music of Color, at the Kunstmuseum, from 6 June to 30 September 2018.

Cotelle, the forgotten champion of gardens

VERSAILLES  Who, today, would commission 21 paintings from a painter, each representing a grove in his garden, with the object of exhibiting them in a 53-meter long gallery? Only a crazy man! And yet, one man did just that some time ago. A person for whom nothing was impossible or too beautiful: it was Louis XIV. The painter was famous at the time, today no one remembers his name: Jean Cotelle (1646-1708). But the venue he decorated in this manner (the Petit Trianon) and his paintings still exist, and offer an interesting parable on the risks of celebrity. The castle of Versailles has decided to celebrate him grandly  by dedicating an exhibition to him, and by re-flowering the gardens according to the instructions taken from his paintings. Cotelle was a roving painter- having made the famous journey to Italy, decorating the Town Hall in Marseille, inventing ephemeral settings in Avignon  and deserves all our attention. He blends in perfectly with our renewed taste for gardens.
 Jean Cotelle, des jardins et des dieux at the Grand Trianon, from 12 June to 16 September 2018.

In the night from 5 to 6 June 1968, 50 years ago, Robert Kennedy, the younger brother of JFK, was in turn murdered just when he was gaining momentum to become the next democrat candidate to the USA presidency. On 8 June, a special train carried his body from New York to Washington. Paul Fusco, a reporter at Look magazine, was ordered by his chief editor to hop on board. He came on with tons of film and spent the whole afternoon, into the wee hours of the night, clicking away at his camera. He took the thousands of persons crowded along the train tracks for one last tribute from the people. The subject of Paul Fusco is famous, rightly so. But this book, which accompanies an exhibition at the Rencontres dArles, integrates two more recent variations: that of Philippe Parreno, who has the scene reenacted with a real train taken in his 70 mm camera  in 2009, and that of Rein Jelle Terpstra, a Dutch artist who worked on the notion of memory and absence. He carried out a truly tedious job, investigating on Fuscos photos in order to find, fifty years later, witnesses who saw the train, so they may give their own photographs. A surprising venture through the looking glass.
 The Train, June 8, 1968, by Paul Fusco, Rein Jelle Terpstra and Philippe Parreno, published by Textuel, 2018, 144 p., 49.

The last exhibition at la maison rouge before it closes