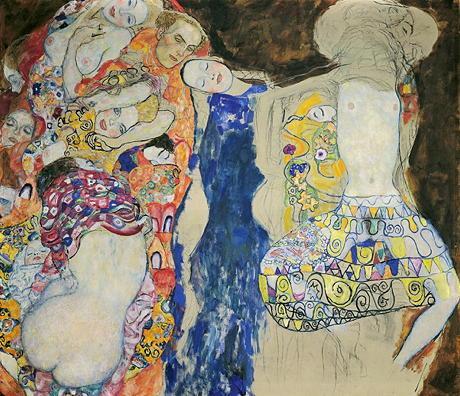 VIENNA  Since 1997 thirteen of his paintings have sold for more than $10M at auctions, and one of them even reached the $80M ceiling in 2006. His work reached another summit ten years earlier, when a painting sold for $5M (artprice figures). Klimts surge is even more impressive in private sales, as when Ronald Lauder paid $135M in 2006 for a portrait of Adèle Bloch-Bauer, and is one of the most spectacular of modern art. Just like Picasso, like Matisse, he has become an icon we cant do without. He pushes sales, he draws in visitors  and increases the frequency of newsletters, like this one! The exhibition the Leopold Museum dedicates to him, under the discrete title of Painter of the century will undoubtedly fill the house. It borrows from the rich collections of the Leopold and Vienna museums in general (with the Belvedere as well as from private loans) to show the artists unexpected evolution. Born in 1862, he shifted away from the comfortable embankments of historicism to sail towards the audacity of the Secession, of which he was one of the main representatives. The exhibition follows him from his classical portraits from the 1890s, to the eve of his death in 1918, with his unfinished The Bride. The nearly twenty paintings, 100 drawings, photos (which he also delved in) are accompanied by numerous documents from various archives.
 Gustav Klimt. Painter of the century at the Leopold Museum, from 22 June to 4 November 2018.

Crayer, between Rubens and Van Dyck

CASSEL  His name no longer means much to anyone, and the curators of this exhibition can boast of having organized the first exhibition ever dedicated to this artist. And yet, Gaspar de Crayer was once a real star: in the 17th century, when he lived between Antwerp, Brussels and Ghent  where he died in 1669 at the age of 80 -, he was the fourth musketeer, next to Rubens, Van Dyck and Jordaens. His star faded increasingly as his colleagues, Velázquez among others, were erroneously seen as the authors of his works. Today he comes back into the limelight, even though his favorite motifs  works of piety  are not necessarily in fashion. But Crayer also produced masterful portraits, such as the ones of the King of Spain, Felipe IV, grouped together in one room. His name refers to our feathered friends of the chicken family, but he did not fly, or travel, much: he did not go to Italy contrary to his colleagues who believed it was mandatory. But, as can be seen in the works exhibited, he soaked up the Italian influence in a remarkable manner, be it Titian or the masters of Bologna such as Guido Reni, without leaving his home. It goes to show that Europe was already in the minds
 Gaspar de Crayer. Entre Rubens et Van Dyck at the musée de Cassel, from 30 June to 4 November 2018.

On how Stuttgart found its Kirchner

STUTTGART  In spite of the Nazi assault on degenerative art, the bonfires, the destructions and the sales, certain German museums managed to preserve or rebuild remarkable collections of Expressionist artists. This was the case in particular of the Staatsgalerie of Stuttgart which tells the story in this exhibition of its collection of Ernst Ludwig Kirchner (1880-1938), which was renewed after the punctures of 1937. A certain Dr. Gervais, who lived between Zurich and Lyon, gave these 82 drawings, 84 prints and original editions to the museum in 1957. The mystery has been solved very recently: all these works actually belonged to Kirchner himself and his widow, and were labeled otherwise by one of his students, Christian Laely, to avoid the freeze imposed on German post-war collections, and to be able to sell them or give them more easily to German museums.
 Kirchner. The Unknown Collection at the Staatsgalerie, from 29 June to 21 October 2018.

MADRID  We know the beginning of the story, the great admiration Monet (1840-1926) had for Boudin (1824-1898), the painter of skies. The elder trained the former to the magic of landscapes in Normandy, and its ever-changing light. We know the rest: Impression, soleil levant and all the impressionism that resulted from it. The mano a mano organized by the Madrid museum in some one hundred works (seascapes, beaches, atmospheres) is not a one-way road: it shows how Boudin in turn was convinced of the genius of his student to the point of becoming an unfettered fan.
 Monet/Boudin at the museo Thyssen-Bornemisza, from 26 June to 30 September 2018.

The sea, an endless beginning: this is a beautiful subject for those artists who studied it throughout the ages. During a Summer in the Havre, a nice selection has been brought together at the MuMA, until 9 September, and this book is the corresponding catalogue. The cover, with a pretty, nude muse in the waves by Adolf Hirémy-Hirschl, sets the tone: we will discover here a number of forgotten artists, for having been too academic or too original. The choice is very large and encompasses conformist artists, illustrations by Jules Verne, photographs by Painlevé (of which Ouverture de la poche incubatrice du mâle hippocampe which has a very definite sexual shape) and the Surrealist cadavres exquis full of seashells. It is truly a pleasure to see Bras sur le Guadalquivir by photographer Pierre Boucher, the diving suit of the Carmagnolle brothers from 1882, the sea blooms by Wols and Zurn, or a lovely set of watercolors by Hans Reichel. We regret the absence of an index, as we cannot check the presence of Bouguereaus Océanide. It is not included, and it merits a pilgrimage to La Rochelle to see it.
 Né(e)s de lécume et des rêves, les artistes et la mer, MuMA/Octopus éditions, 2018, 256 p., 29.

A Serbian artist, born in 1957, who elaborates on everyday objects