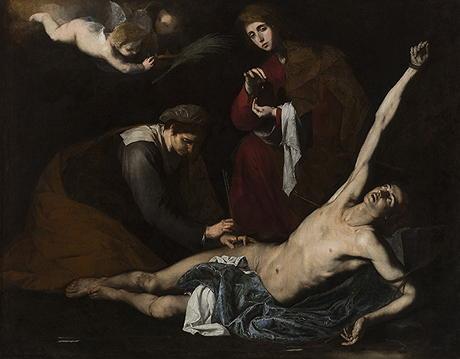 Ribera, the master of torments

DULWICH - The visitor is warned as soon as he steps in to the exhibition: « This exhibition includes  an example ains under the form of tattooed skin». This helps remind us that Ribera was no saint. The Spaniard artist was used Naples and actually was proud of a frightening representation, that of saint Bartholomew skinned alive - one of the most horrible torments in the endless catalogue of human perversity, of which he made various copies. It is a good thing that this exhibition is opening one week after the one on Caravaggio in Paris, at the Jacquemart-André Museum (see our last newsletter): we can draw up a comparison of these two versions of this naturalism and darkness that prevailed at the beginning of the 17h century. Ribera was in fact younger than Caravaggio, and very influenced by him, without being his direct disciple. When the « little Spaniard » (Lo Spagnoletto) arrived in Italy in 1606, at the age of 15, he first lived in the North Caravaggio had left a long time ago. When he arrived in Rome and then Naples in 1616, Caravaggio had been dead for a long time. The older artist lived a violent life no doubt, but that savage violence is sublimated, and is only expressed in gestures, in looks. With Ribera the same brutality is shown without complexes, dressed sometimes in mythologic rags (like when Marsyas and not Bartholomew who is cut up by the cruel Apollo). Ribera sketches constantly, whether on paper or on a canvas, the victims who were crucified, hung, or the target of arrows. Those were somber times, in which Jacques Callot also lived when Europe was torn apart. Something to think about.
 Ribera: Art of Violence at the Dulwich Art Gallery, from 26 September 2018 to 27 January 2019.

Kinetics of the world, unite!

ROTTERDAM  The exhibition « Dynamo » at the Grand Palais five years ago left a strong impression, as it was one of the first complete panoramas on Kinetic art. The designer of that event, Serge Lemoine, is back, and is presenting a smaller version in the Netherlands, integrating younger creators such as Carsten Höller, John Armleder, the Belgian group LAb[au] or British artist Conrad Shawcross. Kinetic artists are the direct descendants of Mondrian and Domela, and are numerous among artists in the southern hemisphere, for they have not forgotten their mentors, contrary to Europeans in the post-war period, who put them aside very quickly. Le Parc, Garcia-Rossi, Cruz-Diez, Martha Boto, often blessed with long lives, got along - and some of them still get along- to turn balloons, rays, colors and lamps. The mechanisms are often simple, the effect being constantly always renewed by the game of chance. The future of this sport in which science and games get together is ensured by  Zilvinas Kempinas (a Lithuanian born in 1969), who makes the hoops of magnetic bands with ventilators, or Peg (a Swiss born in 1974) who gives life to a population of identical pawns (could it be us humans?) with vibrant little ropes.
 Action-Reaction, 100 Years of Kinetic Art at the Kunsthal , from 22 September 2018 to 20 January 2019.

NEW YORK  A critic asked, with some humor, whether the presence of an exclamation mark proved the exhibition was more interesting. The title that is shown here is « Armenia! » and not « Armenia ». In our times where hyperboles are greatly appreciated, and used, maybe we should systematically present exhibitions such as «Monet!» or «Basquiat! » rather than tasteless «Monet» and «Basquiat». Maybe there is no reason for a trial, since the retrospective at the Metropolitan Museum - once again in the news with its new director Max Hollein who has relaunched the project to enlarge the institution, left pending during the mandate of Thomas Campbell, - aims at being complete, with manuscripts, sculptures, reliquaries, textiles, etc. Here we see what diaspora means: while the objects come from various institutions as is usually the case in a presentation of this type, each one of the lenders has something to do with exile, war, or destinies built by adversity: Catholicosate of Cilicia in Lebanon, the Mekhitarist monastery of San Lazzaro in Venice, the Gulbenkian Museum in Lisbon, the Armenian church in New York
 Armenia! at the Metropolitan Museum of Art, from 22 September 2018 to 13 January 2019.

BILBAO  With this Wagnerian name, with a supernumerary h, Thannhauser hides a saga of modern art - but one of those persecuted by the Nazis. The Thannhauser, a German saga Thannhausers (Heinrich the father and Justin the son) were Jewish merchants settled in Kohln, and among the first to exhibit Picasso outside of France. They stayed in touch with for over half a century. The father and son were also pioneers in this model of « global » galleries so much in fashion today. They were settled in Kölhn, Berlin, Lucerne, Paris. In 1940 they were forced to leave Germany and head to France, then to America. In 1965, their donation to the Guggenheim revealed the wealth of their collection: the museum, which had one single Cézanne, suddenly made a leap and multiplied its patrimony by ten fold. Not only with works by Cézanne, but with works by Van Gogh, Picasso - among them one of his first Parisian works of 1900, the Moulin de la Galette) -, as well as others by Manet and Monet, Braque or the Joueurs de football by Douanier Rousseau. Fifty of these works that had never come back to Europe are part of the exhibition. Small dots on the museums huge white spaces, they invite the viewer to contemplate. How small pieces canvas become icons that resist sarcasms, wars, segregations.
 From Van Gogh to Picasso. The Thannhauser donation at the Guggenheim Bilbao, from 21 September 2018 to 24 March 2019.

The art market, so opaque and yet so profitable

When we take a look at the sky-high prices certain works of art go for these days  the famous Salvator Mundi at $450 million in November 2017, dozens of Picasso works at millions each, Cezannes Joueurs de cartes or the work by Basquiat that went from $19 000 to over $100 million in thirty years-, one can honestly ask whether the art market has any logic. The author of this book, an expert in the field and writer in The Art Newspaper as well as at Financial Times, deciphers in very clear chapters a few of the key subjects: money of course, as well as the problems of authenticity and the beneficiaries, art as an instrument of tax fraud and money laundering, the rise of new powers such as China, the boom of tax havens according to a witness, 80% of art, which has become an object of investment, is constantly placed far from the public. The ruthless competition between Rybolovlev and Bouvier is known by the public at large, but other surprising characters pop up in this investigation, such as Simchowitz, the king of flipping, who selects artists whose works he buys lock, stock and barrel in order to hike the prices artificially. In the end one wonders which rational criteria are used to evaluate the rating of an artist? There dont seem to be any.
 La face cachée du marché de lart, by Georgina Adam, published by Beaux Arts éditions, 2018, 240 p., 23 (original edition Dark Side of the Boom at Lund Humphries).