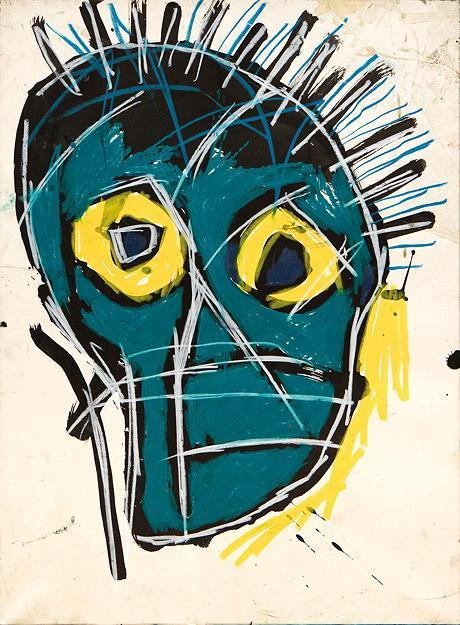 PARIS  We have seen other wonderful retrospectives of Basquiat, in particular the one at the musée dArt moderne de la Ville de Paris in 1984, curated by Suzanne Pagé, the current artistic director of the Fondation, or the one in 2010, or the more recent one, at the Barbican in London. But this one should stick out by its size  120 works of which some of very large dimensions. The value of Basquiats paintings goes up relentlessly, making the insurance and transportation much more expensive. As an example, the 110 million paid by the eccentric, Japanese billionaire Maezawa last year. If other works by the same artist were to go to auction today, they would certainly reach similar if not higher levels, like the 5.37 mt. tall Grillo, one of the main pieces at the Fondation Louis Vuitton. The exhibition, presented over 4 levels, shows not only the drawer, but the colorist as well, the commentator of New York street life as well as the lover of music, of boxing, and even of economics (Per Capita, Price of Gasoline in the Third World. We see above all the complete artist  not a simple graffiti artist but the successor of Leonardo, of Rembrandt, of the Expressionists, which he equaled and profited from.
 Jean-Michel Basquiat at the Fondation Louis Vuitton, from 3 October 2018 to 14 January 2019.

Bruegel, the most beautiful

VIENNA  This is the most important retrospective of the painter of peasant festivities, of proverbs, of Flemish earthiness, but of the Tower of Babel as well, an iconic painting. We know various generations of Bruegel, but the real one is the Elder (approximately 1525-1569), whose 450th anniversary of his death is celebrated this year. 40-60-80 are the masters key figures: 40 paintings, 60 drawings, 80 prints. Some 90 works are brought together here - of which three fourths are paintings  for an event qualified as a «once in a lifetime». It is held in Vienna because the museum, the heir of the collections of the Habsburg dynasty, holds the most beautiful fund in the world, with no less than 12 panels
 Bruegel at the Kunsthistorisches Museum, from 2 October 2018 to 13 January 2019.

PARIS  He is surely a good client, and his shows always attract a large public, be it at the Grand Palais in 1974, at the Fondation Maeght in 1990, at the Centre Pompidou in 2004, or at the Tate Modern in 2011. This year, after the presentation of his sculpture until September at the Centro Botín in Santander, the Grand Palais is giving us a second serving. The official inauguration last Friday by Emmanuel Macron and the King of Spain gives an idea of the importance of the show. The curator, Jean-Louis Prat, has all the required qualifications: for over thirty years he held the reins at the fondation Maeght, he was a friend of the artists, and is a member of the Comité Joan Miró that authenticates the works. The 70-year itinerary shows a man who almost did things backwards: an attentive and fussy artist when he was a Catalan Fauvist, he was surprisingly free when he was over 80 years old, when he painted with his fingers, burnt the canvas, or stepped on it.
 Miró at the Grand Palais, from 3 October 2018 to 4 February 2019.

Tanning, the importance of Ernst

MADRID  For long time she lived in the shadow of her companion Max Ernst. She was 36 years old when she married the 55 year-old cosmopolitan Dada artist in 1946, and she outlived him by nearly 50 years when she died in 2012, over 100 years old (1910-2012). A few yeas after her demise she is finally granted the retrospective that confirms her role as an artist in her own right, capable of going from drawings to oil paintings, from Surrealist compositions with woman-children, to giant sunflowers and the limp sculptures of the sixties, up to the décors for Balanchines ballets. A dreamlike installation, Chambre 202, hôtel du Pavot has been recreated here for the show, a conceptual hybrid by Raymond Roussel, Hans Bellmer and Louise Bourgeois.
 Dorothea Tanning at the museo Reina Sofía, from 3 October 2018 to 7 January 2019.

The memory of walls

It looks like a huge book. It is grey, heavy, and massive. Inside we find stone, white, green or black marble, travertine, and some copper. There are names, hundreds of them, some famous ones such as Guy Môquet, Jean Moulin, colonel Fabien or Robert Desnos; other forgotten ones such as Louis Duriez or André Barraud, who died on 28 August 1944, three days after the Liberation; simple people such as the sewer worker Louis Chevalier or professors at the Sorbonne such as Jean Cavaillès. Their courage marked the Resistance. They were shot down, executed, tortured, deported to Mauthausen or to Dachau, or survived the monstrous conflict. They all have a plate on the walls in Paris. Philippe Apeloig, a graphic artist more known for his posters or for the visual identity of the musées de France, photographed them all one by one, from the front. The result is a surprising encyclopedia of over 1000 pages, arrondissement by arrondissement. An unusual guide, so that we do not forget, so that we look up. It succeeds in opening our historic appetite, as we would like to know more about each one of them, for most of those destinies were shattered and only a few engraved letters remain.
 Enfants de Paris 1939-1945, by Philippe Apeloig, Gallimard, 2018, 1184 p., 45.

How to perfectly fuse landscape and selfportrait