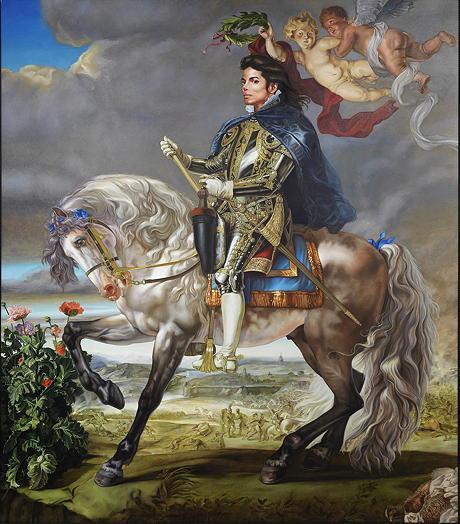 PARIS - The Jackson Five, moonwalk, Thriller. All these words are part of the public domain, from their native Indiana to Calcutta, from Paris to Lagos. Who hasnt seen Michael Jackson in one of his famous video clips? The King of pop, a true icon, has the same destiny as Kennedy, Marilyn Monroe or Muhammad Ali, he has been recuperated, has become fodder for other creators. This exhibition that comes from the National Portrait Gallery of London and designed to be a true blockbuster, studies this aspect of his inheritance. Whether on canvas, on paper, on marble or on videos, from Rita Ackermann to Jordan Wolfson, including Genzken and Paul McCarthy, he inspired the major artists of his time and of years after (next June we will commemorate the 10th anniversary of his death). Not to mention the most famous, the first one to immortalize him on silk screens, when he was only 23 years old, Andy Warhol.
 Michael Jackson. On the wall at the Grand Palais, from 23 November 2018 to 14 February 2019.

LIVERPOOL  Some distracted translators have sometimes translated his name as Fernand Light. This lightness suits well the artist of construction sites and pipes  the inventor of tubist art as it was said mockingly. That is because, before summarizing Léger with his chromos of beefed up workers on scaffoldings, Léger, who was gazed during the First World War, was one of the pillars of the avant-gardes of the 20th century. His Ballet mécanique is among the major experimental films at the time, he worked with Le Corbusier, made a try at textile art, slipped typography into his works: in short, he made a try at all the disciplines that allowed him to overcome the borders of traditional art forms. This exhibition, that brings together some forty works, is the first of this magnitude on English soil in the last three decades, and it show sin particular the large photomontage made with Charlotte Perriand for the pavilion of Agriculture at the International Exposition of 1937 in Paris: a large composition nearly 10 meters big, kept in the collections of the Reina Sofía museum in Madrid.
 Fernand Léger. New times, new pleasures at the Tate Liverpool, from 23 November 2018 to 17 March 2019.

EVIAN  Nordic art is gaining popularity among its southern neighbors. We all know how Larsson and Zorn triumphed at the Petit Palais, and the success of Hammershoi at Orsay twenty years ago, that will undoubtedly be equaled this spring at the Jacquemart-André museum in Paris. The millennium old Icelandic sagas, the brutal Odin and Thor aimed at the Walhalla, Nils Holgersson, elves and trolls: it is not always easy to find ones bearings in this symbolic jungle. This exhibition contributes to decrypt it by looking into Finnish mythology, embodied in the epic of Kalevala and expressed in the delicate watercolors of the beginning of the XXth century.
 Légendes des pays du Nord at the Palais Lumière, from 24 November 2018 to 17 February 2019

PARIS  Exoticism can be found sometimes in small things. In spite of belonging to the developed world, of their taste for technology, their efficiency, the Japanese have preserved passions we cannot understand. To spend hours raking a garden of pebbles (Trump could have given them as an example to save the forests in California), to gather flowers, to cut out sheets of paper are some of their hobbies. But here is another form of leisure, less known than the others, but which is actually, like the others, a real know-how that can even give in certain cases the title of living treasure, that of weaving bamboo baskets, practiced for over one thousand years and which has slowly drifted away from its initial function, which was to imitate porcelain vases from the tea ceremony The musée du quai Branly brought together some two hundred varieties around this art form that combines flexibility and rigidity  a real philosophy applied to this art form.
 Fendre lair. Art du bambou au Japon at the musée du quai Branly, from 27 November 2018 to 7 April 2019.

Garnier, everything for the Opéra

« The style I use is my own », Charles Garnier used to say, even if his famous Opéra house has been described as being in the style of Napoleon III. This book, written by a fine connoisseur, Gérard Fontaine, reviews this work of total art as enhanced by the adjective one could deem incorrectly adapted. The façade, the large staircase, the grotto of Pythia, the foyer, the different ceilings as well as the back doors and the unfinished Glacier are all explained here in detail. We truly appreciate the exhaustive approach of this relentless cream puff: the 43 elements of the outside statues are described, among them la Peinture by Théodore Gruyère or les Heures du soir by François Truphème. The same for the 80 busts inside dedicated to musicians or music lovers, from Marcel Jambon to Richard Wagner including Rolf Liebermann. There is also a summary of the various marbles, the one from Seravezza, the marble from the Green Alps or the white one from Saint-Béat. We can well understand it took 13 years to complete this construction site and the inauguration (to which Garnier was not even invited) was delayed until 1875, well after the fall of the Second Empire.
 LOpéra de Charles Garnier, une uvre dart total by Gérard Fontaine, photographs by Jean-Pierre Delagarde, Editions du patrimoine, 2018, 290 p., 35.