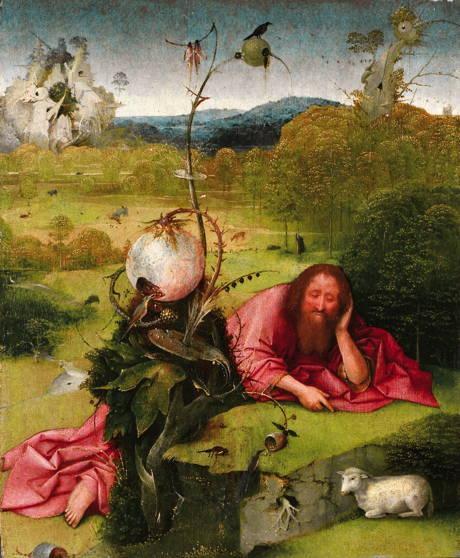 Bosch, king of the Prado

MADRID  We have no memories of so complete Hieronymus Bosch exhibitions for decades, since the one at Bois-le-Duc, back in 1967. All of a sudden, in 2016, two remarkable retrospectives, each with almost all of the artists works (less than forty paintings) are organized for our great enjoyment. Obviously, this corresponds to the 500th anniversary of Boschs death, as well as to the wish for these two venues to distinguish themselves. The first is the artists birth place in the Netherlands, Bois-le-Duc (last February) and the Prado museum, the custodian of the artists most beautiful ensemble, due to the love king Felipe II had for the bizarre artist. This near- simultaneous program and the skirmishes covered by the media when the Bosch Research Project questioned the attribution of three works that belong to the Prado, seemed to have had a positive effect. Those obscure debates between specialists came down to the street. The most passionate moment during the press conference at the Prado on 27 May was surely when curator Pilar Silva refuted the Dutch suspicions. The Temptations of Saint Anthony, the panel of the Seven Capital Sins and Extraction of the stone of Madness were all examined with a microscope. X-rays and dendrochronology were called in, the writings of Felipe de Guevara were deciphered and the pictorial rendering of the leaves on the trees was analysed. The debate is far from being over but this investigation makes Mr. Boschs strange world a little more live.
 El Bosco. La exposición del V centenario, at musée du Prado, from 31 May to 11 September 2016.

BEWARE, LAST DAYS! UNTIL 12 JUNE... Do not miss... JOAN MIRÓ, PAINTING WALLS, PAINTING WORLDS; Mirós preference for large-scale formats and his fascination with the wall at the SCHIRN KUNSTHALLE FRANKFURT. Read the article in art-of-the-day.info

Le Brun, the champion of cardboard

MADRID  Those who have already seen his large compositions at the Louvre Lens (where there is a retrospective) should go south now, to Madrid. Indeed a large, targeted exhibition is been given of Le Bruns cartons. This almost derogative term does not refer to packing up his paintings, but rather to the preparatory drawings Louis XIVs favourite painter did for the castle of Versailles, in particular for the Hall of Mirrors (Galerie des Glaces). Traditionally, these sketches on the 1 scale were destroyed once they had been used. In the case of Le Brun, many of them were kept; as a matter of fact they number up in the hundreds. They allow us to understand the report techniques  usually done with small holes that allow the artist to copy the drawing on the wall with dots. There is another major point of interest: the exhibition allows us to discover frescoes that had disappeared, like the one of the staircase of the Ambassadors, which Louis XV sacrificed to a new development.
 Le Brun. Dibujar Versalles at Caixa Forum, from 16 March to 21 June 2016.

Art in the time of Franco

MADRID  There is a given period in Spanish art that is hardly known, and that is the fifties. The peninsula was then under Francos suffocating hand and as one can easily imagine- under a lethargic hopelessness. Well, that is not exactly what this very rich exhibition demonstrates. With the title Campo cerrado (Closed Field), taken from a novel by Max Aub, it combines two elements. On the one hand official or academic art (Zuloaga) struggling to make a name for itself at the European level (Spanish participation to the Triennale of Milano in 1951 was considered a symbolic victory for the regime); and on the other considerable architectural research since Spain had at the time a General Department of the Devastated regions that built continuously).But there was also the seeds of a protest movement that expressed itself in satirical magazines such as La Codorniz and the first works by artists such as Tápies and Saura. Aside known works like The Enigma of Hitler by Dalí, it swarmed with what was strange for foreign audiences: The last horse , a movie from 1950 by Edgar Neville, reports from the Istituto Luce, models or paintings by Benjamín Palencia andt Francisco Nieva, interpreters of the postismo, the delayed Spanish version of surrealism.
 Campo cerrado. Arte y poder en la posguerra española, 1939-1953 at museo Reina Sofía, from 27 April to 26 September 2016.

MADRID  He is the most famous Uruguayan painter, a name that appears in the national pantheon next to those of writer Juan Carlos Onetti and football star Alcides Ghiggia. While he is known in particular for his compositions in the shape of chess boards or grids, Torres-García (1874-1949) was right in the tracks of the XXth century avant-gardes. In the period between the two wars he lived in Brussels, Paris, Barcelona, and New York, where he was in turn (something of) an expressionist, (something of) a Cubist, (quite) a Constructivist, as well as something of a writer, a carpenter, etc. The retrospective which comes from the MoMA includes paintings, drawings, unique copies of books, wooden toys and shows all his itinerary in the rooms of the Fundación Telefónica recently designed by architects Quanto Arquitectura and Moneo Brock Studio, with its spectacular metal staircase.
 Joaquín Torres-García, un moderno en la Arcadia at the Fundación Teléfonica, from 19 May to 11 September 2016.

Photo España, where is Europe heading to?

MADRID  This is its last year as a teenager. Indeed, the Photo España festival, born in 1998, presents its 19th edition this year. Their recipe has not changed: federate a large number of exhibitions around a rather flexible theme. After the Latin-American continent in 2015, Europe and its plural identity are now on the program. Aside from the works by artists as varied as Bernard Plossu, Boris Mikhailov and Spanish female artist Linarejos Moreno, a section dedicated to migrations is right in line with contemporary concerns, in particular in the collections of the Nicéphore Niépce museum the productions by Antoine dAgata, John Batho, Robbins & Becher. Among the rarer exhibits, the long report by Maris Maskalans on the village of Nagli in Latvia (academy of San Fernando), the archives of photographer Paco Gómez, who died in 1998 (Canal room), or the description of Spain under Franco by Juana Biarnés, born in 1935 and considered one of the first women photographer reporters in the country (Fernán Gómez theater).
 Photo España is held from 1 June to 26 August 2016.

In the Saura family, we all know Antonio, the painter (1930-1998) and Carlos the movie director (born in 1932), the author of Cría Cuervos (1976) or The Hunt (1966), a merciless portrait of the Spanish high bourgeoisie during Franco. Before making a name for himself in the world of movies, and putting his engineering studies aside, Carlos had made at try at photography. He was attracted by the neo-Realist movement, and very impressed by the documentary by Buñuel, Tierra sin pan (Breadless Land), on the backward region of Extremadura, the young man takes a ruthless look at his country following the war. His framing is already that of a movie director, the subjects are ahead of their time, such as the one on a town in the region of Aragon, which would be the victim of the breaking of the damn of Ribadelago in 1959, and the sensitive empathy with the characters he sketches  peasants, minors, school children or women in black  and we think right away of comparable works by Cartier-Bresson or Eugene W. Smith. The very sober title España Años 50 in Spanish has become Vanished Spain in English. In the superb texture of his photographs there is indeed the dimension of a world long gone
 Vanished Spain, photographs by Carlos Saura, Steidl, 2016, 256 p., 65.

BERLIN - The 9th contemporary art Biennale is being held from 4 June to 18 September 2016.

BORDEAUX - The Cité du vin, designed by the XTU agency, was inaugurated on 1 June 2016.

FONTAINEBLEAU - The Festival de l'histoire de l'art (Art History Festival) is being held from 3 to 5 June 2016, with a focus on Spain.

LA GACILLY - The photo festival Peuples et Nature is being held from 4 June to 30 September 2016.

MONTREAL - The International Digital Arts Biennial is being held from 3 June to 3 July 2016.

The first retrospective in France of the British movie director, the author of Black Code