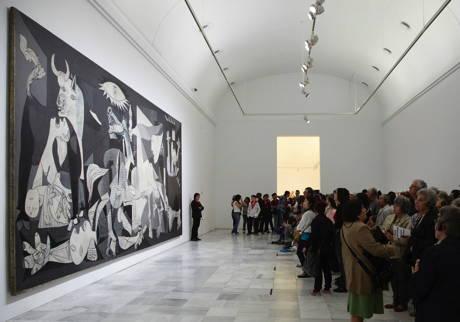 MADRID - April 26 1937. Monday. Market day. Guernica, a small town in the Spanish Basque country. The bombing of the population by the German Condor squadron could have disappeared in the archives as another barbaric act among so many others. But it is engraved in memories not only for being the first real bombing of civilians but also for having inspired Picasso to carry out his most famous work of art. The destiny of this painting conceived between the months of April and May in the attic of his atelier on rue des Grands Augustins in Paris is in itself a legend. It was shown in the Spanish pavilion of the universal expo in Paris until November 1937. It then went on a European tour which took it among other places to a Ford garage in Manchester and it was then kept at the MoMA in New York City. The large canvas (777 cm long) in Spain only in 1981 following the death of Picasso and of Franco, and today it is kept at the museum Reina Sofia in Madrid. To celebrate the 80 years of Guernica, the museum has brought together interesting documents including photographs taken by Dora Maar of the different phases or other administrative documents. Among others we see the letter typed on May 31, 1937, which lists the propaganda expenses incurred by the Spanish Embassy in Paris. Next to Arthur Koestler, Pietro Nenni, or Buñuel (who received 554,000 francs), Picasso received the modest sum of 150,000 francs. That was to reimburse the expenses he had incurred. The subject of the exhibition which plunges us back in the atmosphere of 1937, with the real painting in the background, guarded permanently by two security guards, is actually another. The exhibition shows that Guernica was not an isolated accident in Picasso's career but rather the achievement of more than a decade of tortured, injured, and anguished screaming figures. This long process, nourished by personal tensions, found its greatest expression and most in sync with the cruelty of the times in the massacre of the spring of 1937. One can disagree with this interpretation. It is supported by loans from Malaga, Paris, Houston, and Stockholm among others. Its merit is to renew the traditional interpretation of the great icon of the 20th century.
 Piedad y Terror en Picasso. El camino a Guernica, at the Reina Sofia Museum from April 5, to September 4, 2017. Catalogue, 196 pages, 35.

PICASSO IN THE NEWS

Boisgeloup, a place for sculpture

ROUEN - After Picasso died, during the endless inventory for his inheritance (led by the famous auctioneer Maurice Rheims) specialists discovered, astonished, an aspect of the artist's production which had been largely unknown. Sculpture. For this 3D production the artist found the ideal place which he bought in 1930 and used until 1935, when he tempestuousy parted from Olga: the Normand mansion of Boisgeloup near Gisors. This was one of the many properties that belonged to the artist, together with the Villa California in Cannes or his castle of Vauvenargues, near Aix-en-Provence. Boisgeloup is finally offered specific lighting. The exhibition shows a sample of what he produced there: traditional shapes sculpted on the round as well as assemblages of objects found such as branches, animal skulls, dead butterflies, strings; experiments with prints from napkins or faces in plaster and cardboard; fine sculptures in pine and then hundreds of drawings, photos, and even films in which we see Olga skipping around the tall grass, guests having cocktails or even Bob the great St. Bernard of a falsely tight family...
 Boisgeloup, L'atelier normand de Picasso, at the musée des Beaux-Arts, April 1 to September 11, 2017. Catalogue Artlys 256 p., 39.

 During this exhibition the castle of Boisgeloup will be exceptionally open to visitors on April 22, May 13, and May 27. It is hosting American artist Joe Bradley and in the gardens many monumental sculptures by Julian Schnabel and Douglas Gordon.

ANTIBES - Picasso was the perfect prey for photographers. He also had great talent in exploiting the fame that these multiple endless snapshots built for him. Dozens of photographers, from Brassai to Doisneau, from Lucien Clergue to David Douglas Duncan caught the great Minotaur in their lens. Irish photographer Edward Quinn (1920-1997) was among them. Their friendship began on July 21, 1951, when Quinn attended the annual exhibition of pottery artists in Vallauris, lasted two decades and produced over 9, 000 photographs of which around 100 are presented here.
 Picasso sans cliché. Photographies d' Edward Quinn at the Musée Picasso, April 8 to July 2, 2017.

NAPLES - In 1917, Picasso produced his most monumental creation, the theater curtain of Parade. The work was imagined in Rome where Picasso had joined Cocteau and the Russian ballet troupe. This trip was also marked by his encounter with Olga, his future wife, and their trips to Naples and Pompeii. An exhibition is organized on site until July 10, 2017, which recounts this adventure.
 Our e-flash in English presents the exhibition.

PARIS - The relationship between Olga and Picasso, which in the beginning was traditionaly serene, turne d to arguments and took on a cruel turn until the final separation in 1935. They had shared their lives for 17 years and had a child, Paul. The musee Picasso looks into the Olga period until September 3, 2017.
 A report on the exhibition.

The call of the primitive

PARIS - The lasting relationship between Picasso and primitive art gives us an opportunity for a detailed analysis at the museum on Quai Brandy, until July 23, 2017.
 Our report on the catalogue.

A collaborative work involving students from a local high school

Artists and watering holes have always gotten along. An important part of modern literature was written in cafés (during the period of Lights, the Verri brothers in Milano published a beautiful magazine called Il Caffè) but the relationship has never been as fertile as it was at the turn of the twentieth century when painters took over the front row. There was of course Picasso, who haunted the traditional cafes in Barcelona. But Forain, Toulouse-Lautrec, and Camoin found their inspiration there as well. The book accompanies an exhibition at the Cité du Vin in Bordeaux and brings back to life forgotten talents, from naturalist Léon Lhermitte to bohemian Bottini from Montmartre (the son of an Italian hairdresser and a Spanish laundress!), up to Pierre Roy, the Surrealist who died in Milano in 1950, who took great pleasure in promoting cheap wine through billboards posted on the cruisers of the French Line sailing off to America.
 Bistrot ! De Baudelaire à Picasso, directed by Stéphane Guégan, Gallimard/La Cité du Vin, 2017, 160 p., 29.